Off Grid is being demo'd at Milliways during Chaos Communication Camp 2019 and so we decided to do something special with it, by making a mod of camp, during camp, streaming the process, and adding things to the mod as camp itself is being built!

The streams themselves will take place on twitch.tv/semaeopus (and other reputable platforms) for the first 3 days of camp, and will feature some friends of Milliways who cannot make it to camp such as Lauri Love, pathfinder, March, and possibly a couple of others ;)

The idea is for it to be a colloaborative project on [1], where anyone can make a pull request and add something to camp, whether that be themselves as a character, some props and environment models to make it all look more life like, a hackable device or project that someone has brought to camp IRL. Not only that, we intend this to be a living and ongoing project, that we add to at every camp and every congress, making it bigger, more complex and more in depth over time as a representation of everything Milliways and CCC.

Come and join in on the stream, or better yet come to Milliways for a whisky, to play the game, and to watch the stream in good company!

**This Stream has now passed but if you would like to watch the replay you can check out the recording of the Milliways modding stream here.

We have a couple of members of our Discord community taking the lead, the core Off Grid team will be around to lend support. You can follow progress in the #modding channel on the Discord.

You can watch the streams here on Twitch. On Youtube or in Mixer.

The times are listed on the CCC Self Organised Session page

How do I take part?

Well, are you at CCCamp or at home?

At home: Watch the Stream here on Twitch

At home after CCCamp? Well the Git repo will be an ongoing thing even long after CCCamp19 has ended, make a pull request here and contribute to it, or make your own mod from it!

Adding to the mod via git

There are a couple of ways that you can add to the mod:

Adding some props or models

The simplest way to add to the mod, doesn't require a copy of the game, just download the git repo here.

You can then checkout the "LevelAssets" folder to look at the style and scale of existing props and make a model of a structure or an object at Camp and push it back up to that location in the repo.

For more details on setting up your models to match our shaders and use vertex colours appropriately etc. you can follow this handy Asset Creation Pipeline guide!

Adding to the map layout or the mod itself

If you would like to add to the map of CCCamp there are a couple of additional steps:

To do this you will need a copy of OFF GRID and the modding tools via Steam. For this you need to have backed OFF GRID during the Kickstarter at the #FirstAccess level so that you have access to the modding tools -OR- if you are at CCCamp19, as a gift to camping hackers, by finding mc.fly and giving any donation to Milliways you can get a testing key. From there you can download the full modding toolset as described on the Getting Started with the LevelKit pages, and add what ever you like by following any of the subsequent modding tutorials.

You will need to place the Git repo into the "Assets>Levels" folder in your levelkit project to work on the Milliways mod. 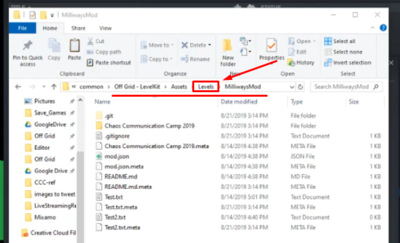 If you want to make changes to the Map you need to remember the Unity scenes themselves are not mergeable, so instead MAKE A NEW scene that we can copy stuff over from into the MASTER scene so as to avoid conflicts.

DO NOT WORK DIRECTLY IN THE MASTER .unity SCENE!!

Instead you can use the multilevel functionality in Unity and have the master scene in the background for reference, and work in a new scene you have made over the top of it.

If you have any trouble or questions just ask @devteam in the #modding channel on our [Discord].

Looking forward to seeing your mods!

A life like (if slightly stylised and low poly) version of the camp setup based on the plans made ahead of time and some of the organic chaos that always occurs during buildup. 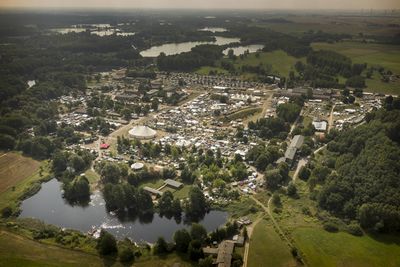 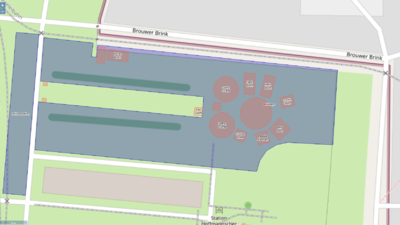 This is the central hub of every Milliways village

There is always a free flowing beer tap at the Bar 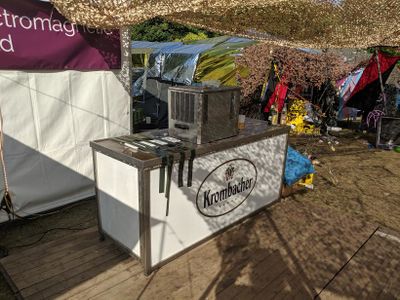 Milliways puts on a full size professional catering kitchen to feed all the hungry hackers.

This often includes a dedicated bakery

An important section of camp and where all the lizards hangout.

The OFF GRID annex

Probably a computer in the main Milliways dome. A small addition to camp that is demoing the game that you are playing ... meta.

What is in the mod?

Well we have some ideas, but surely you do too?

Things that need to be built

This is a list of Props and models that the community could make for the mod. We already have some things in production like trees, big tents and other specific things, so this list might change as we approach the event.

Most of the stuff has been modeled already, so we would like to see some more crazy things like:

Design rules for creating the models are here 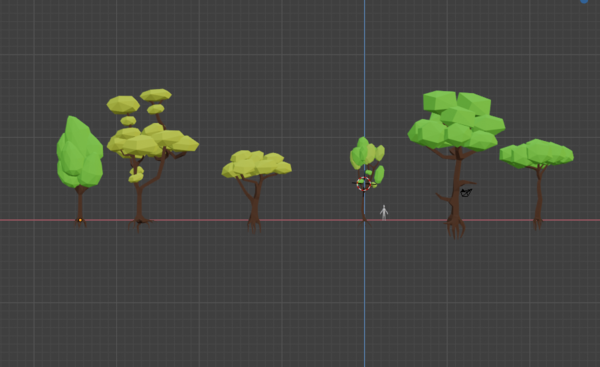 Trees for Milliways Mod and OFF GRID

Player Objectives and Things to do

Milliways attendees can add themselves as characters that can then have conversations with the player and educate them on an element of camp or hacker culture at large.

To add your self as a character follow these steps

Players should be able to give mc.fly a donation and collect a Milliways Challenge Coin.