Mission Objects, as the name suggests, are objects that are found within a level, with their purpose being to help the player complete the mission. Mission Objects can include many things like player spawns, interactable items, hackable devices, and triggers - all vital features that most levels will need. 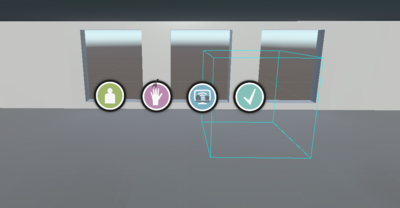 Examples of what some Mission Objects look like in Unity

Triggers are Mission Objects which are used to start an event (like a conversation pop-up window) when a player walks into the trigger zone. They are a very commonly used Mission Object and have many uses, like starting conversations, triggering a sound to play, mission objective updates, and much more. For a detailed guide on how to create triggers, and for more on what they can be used for, read the Triggers and Examples page.

Spawns are a Mission Object simply used to tell the game where exactly to spawn into the level the characters that have been defined in the Mission Script - this includes the player, but also NPCs like Guards. For more on creating working spawns, read up on the Configuring Spawnpoints page.

Hackable objects are a core feature of Off Grid, they come in many shapes and sizes, including phones, cameras, refrigerators... the list is endless, anything can be turned into a hackable object and hackable objects are again a very common Mission Object, mainly because one of the main features of the game is to hack into things! Hackable devices are interacted with by using the SSH Connection app and the access, UI, and function of each hackable device can be very varied and easily modified by modders. For a detailed run-through of hackable devices, take a look at the Hackable Devices page.

Creating a Mission Object in your level

Adding in a pre-made Mission Object

In the Hierarchy tab, click Create and then navigate to the directory shown in the image below, then click on the Mission Object which you are looking to create.

Let's say you've created a model for a stapler and now you want to configure it such that it acts as an object that the player could pick up. In this scenario, you would want to turn the stapler into a Mission Object, specifically an interactable object that the player will grab. To make this work, there is another way you could configure it, rather than adding many components into the pre-made Grab Interaction object.

To start with, place the model into your level. We'll use the stapler as our example, so once the stapler has been placed into the level, the object should only have a couple of components (those that make it act as a static model).

From here on, it's quite simple to configure it to be an interactable object, just click on the Add Component button in the Inspector View for the object, and add the Mission Object component to the model as shown below. 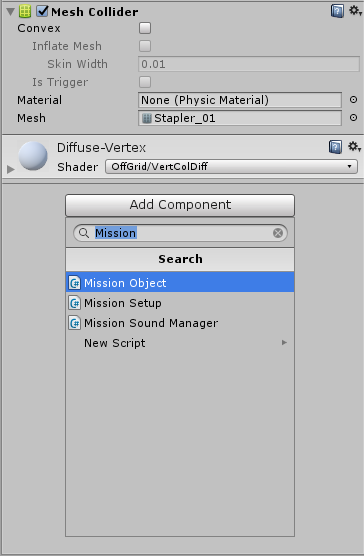 Next it will start off as a Generic Mission Object, just click on the drop down button for Mission Objective Type and change it to Interaction. Now you have manually created an interactable Mission Object! Look at the image below for what your object should now look like, highlighted in red are things you may want to consider changing, and also parts you will need to add in to make it function properly - since it hasn't been configured properly yet to act as an interactable (to see how to do that just read the interactable items page).

Adding functionality to a Mission Object

The Grab action will allow player input to play the animation make the player character reach and grab an object, but this is all it will do. Deciding on how you want the object, in our case a stapler, to behave is still to be done. What we would want to do in this instance most likely would be:

Ofcourse what the inventory item could be used for still needs to be defined too. It could be set as a precondition for an objective such as "Steal the prototype IoT stapler". You can read about setting up objectives at .... TO BE COMPLETED

Essentially you would set up the precondition that the stapler needed to be the inventory to complete the objective by ... TO BE COMPLETED